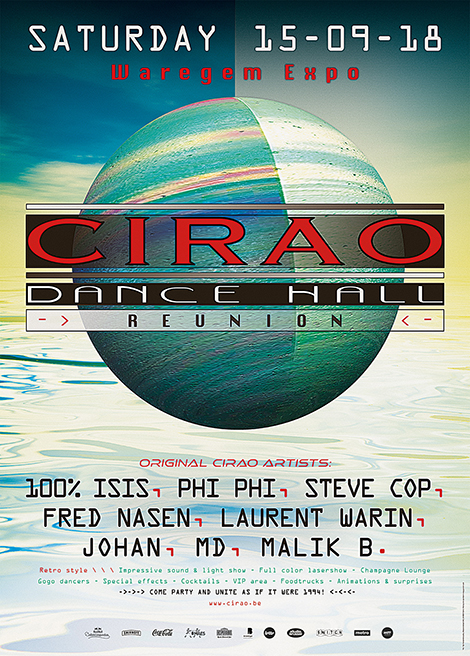 Cirao was a trendy club in Waregem that caused quite the fuss in the early 90s. The clubbers came from all over Belgium, France, Germany and beyond to be part of this legendary place. Cirao was included in the list of “Legendary Belgian Clubs” and praised for the musical story. The club was at that time an absolute frontier in the programming of electronic music. National but also international DJs played behind Cirao’s decks. The place was packed, week after week and Waregem was the epicenter.

The club closed its doors in 1996. After 22 years the time is ripe for a Cirao Dance Hall Reunion! That’s why they would like to invite everyone who knows this mythical place on September 15th 2018. Come party and unite as if it were 1994!

Today’s heroes are also welcome, because the sound of that time is totally back. The artists on the line up are all resident or frequently asked guest DJs from back in the days. They will return to the original sound which Cirao was so well known for and make you relive the good times of the past!

Let's be clear, this is not yet another party at Waregem Expo. The organization spares no effort or expense to bring back the unique atmosphere of yesteryear. As their standard is very high you can expect an impressive sound, light and laser show. They even thought about the GoGo dancers and will take care of their presence.

Conviviality is important, that is why the organization won’t use the full capacity of Waregem expo’s halls. Besides that, they will arrange cosy corners where you can relax with a delicious glass of Champagne or a cocktail. On top of that, there will also be a range of high-quality foodtrucks where you can grab a bite when you get hungry. The people who opted for the VIP treatment will get spoiled in a special VIP Area.

We assure you, this will be the party of the year! You better don’t miss out!